1850s – croquet is first introduced into England and quickly establishes itself across the country.

1864 – croquet equipment is being manufactured in York by Messrs Cordeaux and Ernest’s Croquet and Wood Turning Establishment. Each set includes rules of the game, one of the very earliest versions of the rules to find their way into print. 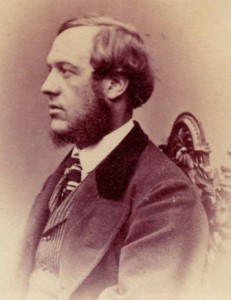 Walter Whitmore, Secretary of the National Croquet Club, organised the 1870 York tournament and was himself a competitor in it

1870 – York is chosen as the venue for a June croquet tournament, organised by the National Croquet Club, and featuring some of the country’s top croquet players.

1874 – Heath’s The Complete Croquet Player includes York among the fifteen principal croquet clubs in the country.

1896 – guests at a garden party at Bishopthorpe Palace enjoy croquet, bowls, music, and a tour of the palace and chapel.

1900 – an advertisement appears in the York Herald: “Wanted, a Field, four acres or thereabouts, in the suburbs of York, for the Yorkshire County Croquet Club.” A croquet ground is eventually established at Dringhouses.

1906 – the Yorkshire Croquet Tournament, inaugurated two year earlier, transfers to the Yorkshire County Croquet Club grounds at Dringhouses, The event is then an annual fixture at Dringhouses until curtailed by the First World War, with each tournament lasting several days.

1914-18 – military hospitals throughout the country turn to croquet as a restorative outdoor team activity for convalescent soldiers.

1939-45 – croquet clubs across the country suffer the multiple challenges of enemy action, grounds commandeered for military purposes, fuel rationing, members diverted to active service, labour shortages, and an embargo on the manufacture of replacement equipment.

1965 – inauguration of the annual Roses sporting weekend between the Universities of York and Lancaster, with, as its finale, a croquet match between the two Vice-Chancellors.

1988 – York Croquet Club is re-formed and holds its first season at Beningbrough Hall, before transferring into the City of York to a green on Salisbury Road near Water End.

1992 – York Croquet Club moves to its present grounds on Scarcroft Road, initially with the use of one full sized lawn.

1996 – York Croquet Club joins with the bowls clubs playing on the adjacent greens to form the Scarcroft Green Association, to manage the Scarcroft greens on behalf of the City of York Council and the Freemen of York.

2017 – York Croquet Club shares a third full sized lawn, making it the Association Croquet club with the largest number of lawns in Yorkshire, and enters into a long lease.  The Club also launches the Northern Croquet Coaching Academy at York.

2020 – York Croquet Club takes over full use of all four lawns at Scarcroft Green and full responsibility for the whole site.

2021 – York Croquet Club holds a Home International for the first time – England versus Scotland – and recruits a record number of new members.

2022 – The Club looks forward to developing its activities at Club level and regionally, and its coaching programme through the Northern Academy at York. However the main focus of the Club remains participation and pleasure. Club members are looking forward to another enjoyable season in 2022: why not join us?